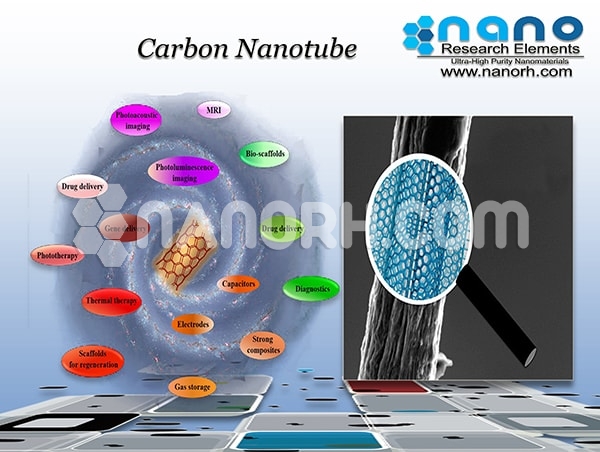 The Carbon nanotubes are carbon's allotropes that have barrel-shaped structures. These particles of carbon have exceptional properties that are utilized in gadgets, optics, and nanotechnology. Particularly, due to their surprising electronic, warm conductivity and mechanical properties these carbon nanotubes have immense application.
The Carbon Nanotubes is round and hollow molded substance. These are produced using the carbon, with the width that can be estimated on the size of a nanometer.
The Carbon Nanotubes are of various shapes that vary in their length, width, the number of layers and the sorts. In spite of the fact that these are produced using in a general sense the comparative sheet of graphite, however, their electrical highlights contrast due to the disparity. Like some act as metals and some as the semiconductors.

Each kind of carbon nanotube has a particular reason, as some predicament to specific cells while others fill in as building apparatuses. In contrast with different components, building materials and even extraordinary sorts of carbon, the nanotube shape is the most grounded, has the most elevated particular thickness, electrical and warm conductivity, and is the most impervious to strain. A standout amongst the most critical properties of a nanotube is its shifting thickness, length, layers, and helicity, as these attributes build up the structure, and subsequently, the electrical characteristics of the particle. One of the real uses of carbon nanotubes is in disease treatment, as the atom could aid two altogether different ways. Nanotubes are in charge of distinguishing proteins related to oral disease and can do as such in only 60 minutes. Concerning mechanical utilizations, nanotubes are making lighter, more slender TVs with better picture quality.

THE POTENTIAL APPLICATIONS OF THE CARBON NANOTUBES

These tubes like graphite structures have more improved highlights and capacities that make them extremely helpful in a tremendous assortment of the applications in the optics, the hardware, and numerous fields of the science. The Carbon nanotubes are prepared to do strikingly the properties of the high material. These properties are close to their theoretical confinements, as the warm and electrical conductivity, solidness, sturdiness and the quality.
The Carbon nanotubes have astounding capacities that have been utilized by the entire world. The utilization of carbon nanotubes is in hundred of various purposes. That is from green innovation to solution and dress. Here are a few utilizations of this awesome substance.

Later on, we will see the foundation of a huge scale blend of carbon nanotubes and in addition an increasing speed in inquire about focusing on their applications. Without question, carbon nanotubes speak to a material that offers awesome potential, carrying with it the likelihood of leaps forward in another age of gadgets, electric hardware, and biofields.