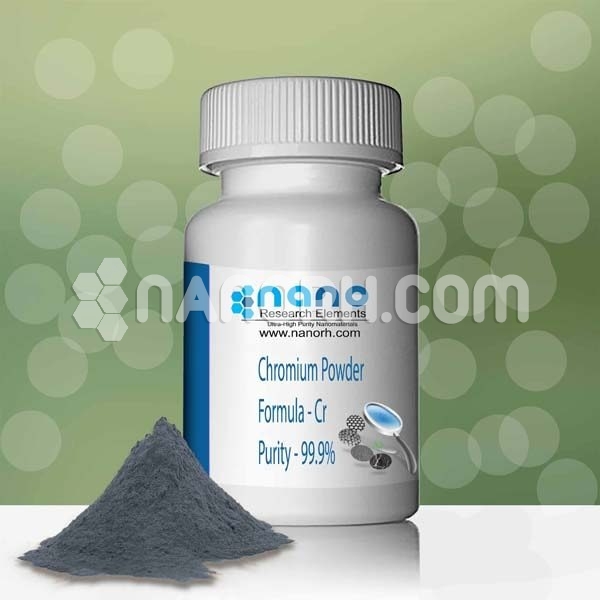 chromium powder (Cr) is a chemical element with the symbol Cr and atomic number 24. It is the first element group 6. It is a hard and brittle steel transition metal, bright gray. Chromium has a high rate of use as a metal that can be polished to a mirror while resisting fogging. Chromium is also the main component of stainless steel, a popular alloy of steel due to its extraordinarily high specular reflection. The simply polished chrome reflects almost 70% of the visible spectrum, with almost 90% of reflected infrared light waves. The name of the element derives from the Greek word χρῶμα, chrōma, which means color, because many chromium compounds have an intense color.

The ferrochrome alloy is commercially produced from the chromite by means of silicothermal or aluminothermic reactions and chromium metal by roasting and leaching followed by a reduction with carbon and then with aluminum. The chromed metal is of great value due to its high resistance to corrosion and hardness. An important development in steel production was the discovery that steel could be highly resistant to corrosion and fading by adding metallic chrome to form stainless steel. Stainless steel and chrome (chrome plating) together account for 85% of commercial use.

In the United States, trivalent chromium (Cr (III)) is considered an essential nutrient in humans for the metabolism of insulin, sugars and lipids. However, in 2014, the European Food Safety Authority, acting for the European Union, concluded that there was insufficient evidence for the recognition of chromium as essential.